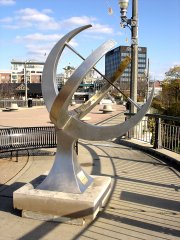 In October 1999 the cities of Lafayette and West Lafayette, IN dedicated a modern looking 8-foot high equatorial dial in honor of the coming millennium. The dial was designed and built by David Aho with a stainless steel equatorial band 60 inches in diameter. The equatorial band has a brass inlay showing the hour marks with Roman numerals. The dial still looking clean and modern located on the John T. Myers Pedestrian Bridge and has a dedication plaque Oct 22,1999. As reported by wlfi.com news, it was one of the first public art installations in the community. Now the dial is celebrated as paart of October's Community Planning Month. You can see photos of the dial on the NASS registry at http://www.sundials.org/index.php/sundial-registry/onedial/376.html or you can watch the Wlfi.com video at: https://www.wlfi.com/content/news/October-is-now-known-as-Community-Planning-Month-in-Greater-Lafayette-562876071.html 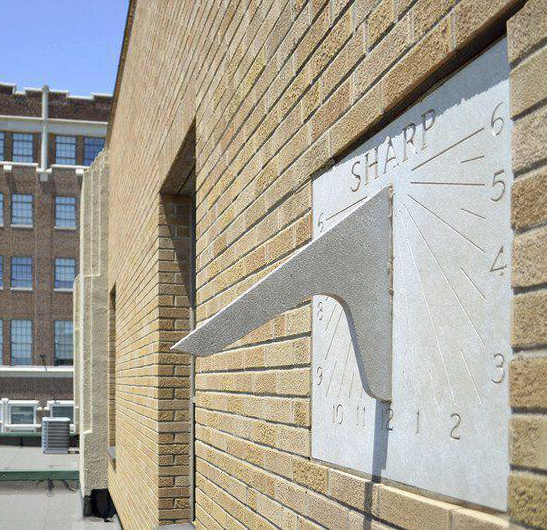 In downtown Joplin, MO, John Hadsall of the Globe digital edition began probing into the sundial on the face of Ron Jones's Commerce Building at 113 West 3rd St. Hadsall says, "I’ve been enchanted with this sundial ever since I noticed it during a lunch-break walk. I’ve written before about how I hoof it downtown and find all sorts of treasures under our noses, from the amazing front porches in the North Heights Neighborhood to the brick sidewalks that remain throughout that neighborhood, Murphysburg and other downtown residential areas."

"The sundial is believed to have always been a part of the more than 100-year-old-building.  Originally built in 1904 for a machinery company, it was remodeled into a bus station in 1937."  And over the years the building was abandon, finally being purchased by Jones and his business partner Ivan McElwee.  John proceeded to see if the dial told accurate time, taking a photo of the dial and its shadow "at about 1:05 pm on Thursday [18 July 2019], I took a picture of the sundial at 111 W. Third St... It appeared to be a little behind: The shadow of the gnomon was still crawling toward dead center of the 12."

John gives several possibilities of the dial's time inaccuracy, but the truth is far more interesting.  The founders of Joplin in 1873 used magnetic north to lay out the street grid.  The recessing of the sundial in the wall aligns the dial to true north south.  A very close look at the dial construction shows that the afternoon hour lines converge on the eastern edge of the toe of the gnomon.  That is, this sundial was designed for the thick one inch gnomon where morning hour lines converge on one side of the gnomon and afternoon hour lines on the other  To read the time, one needs to drop lines from the left and right gnomon edges straight down creating a split noon.  For the morning, read the western shadow edge with reference to the west gnomon line, giving a shadow time of about 11:41 solar time.

The Joplin dial is at 37° 5.0' N, 94° 30.8' W, about 4.5° west of the central time meridian at 90° W.  That translates to 18m early. That is, when the sun is over the central time meridian, it will take another 18m before noon occurs in Joplin.  We also need to include the sun's Equation of Time, that annual variability between solar and civil time due to the earth's slightly eccentric orbit and 23.4° tilt of its axis.  Calculations of the EOT are provided by the British Sundial Society and others, showing that on July 18th the sundial was slow (early to clock time) by just a bit more than 6m, giving a total difference between sun and civil time of 24 minutes.  With above photo taken at 1:05pm central daylight time, we subtract 1h 24m to get sundial time of 11:41am.

So now you know that this century old sundial at 111 W Third Street still keeps accurate solar time, and with a little math, you can set your watch to the minute!  You can hear an edited version of John's blog with history and his not so precise conclusions about the sundial here:

For a full version of John Hadsall's podcast "In Case You Missed It" go to: https://www.joplinglobe.com/multimedia/podcast-in-case-you-missed-it-sundial-building/audio_95587b74-ab7c-11e9-b4e8-bfc13b97fe5b.html

and you can read John's blog at: https://www.joplinglobe.com/news/lifestyles/joe-hadsall-downtown-sundial-still-working-as-intended/article_6cf74006-963d-5439-83cc-e6bdafd85dd3.html 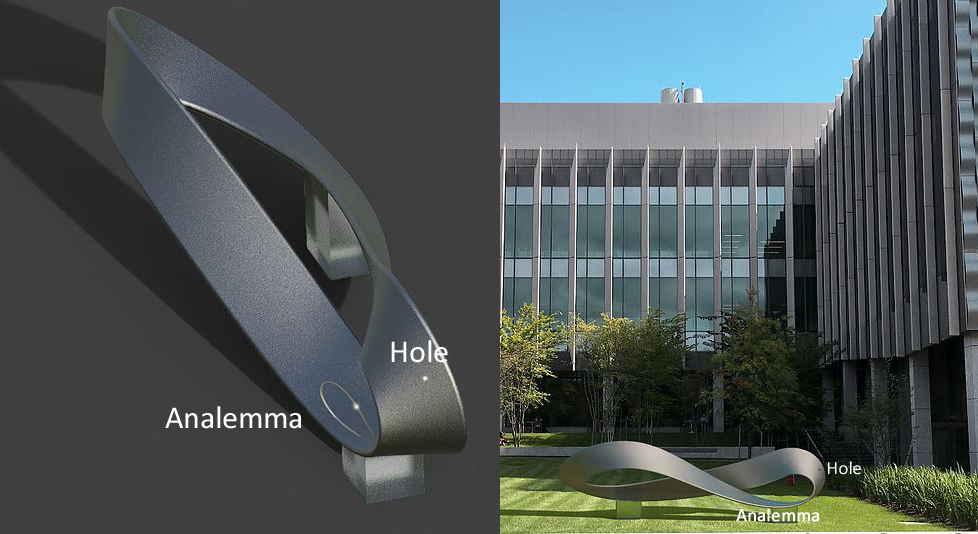 "Infinity Possibility" was dedicated this week [May 5th, 2019] at Brown University in Providence R.I. thanks to a grand design challenge to the university's School of Engineering by 1979 alum Charlie Giancarlo. Giancarlo wanted something "that would represent the rigor of engineering work, but have artistic beauty as well". According to Brown news, "A student group called Brown STEAM (Science Technology Engineering Arts and Mathematics) took up the challengte, and the result of more than two years work is a stainless steel noon mark sundial measuring 15 feet long and 4 feet high. STEAM’s then-president tapped Austin and David Schurman, both first year students at the time, as project managers. The pair assembled a team of around 20 students to start brainstorming ideas and getting input from the broader Brown community.

David Shurman and his team worked with a sundial expert, Bill Gottesman, a member of the North American Sundial Socity,  Shurman said, "We wanted to explore the interplay of the mobius strip's shape with that of Brown's unique analemma path to make a sculpture personalized to the location it will inhabit for, hopefully, up to a century." In the end section of the "lazy eight" mobius strip is a hole allowing the noonday sun to fall on the northward piece of the strip below. The lower mobius band has an etched analemma showing civil noon in front of Brown's Engineering Research Center. 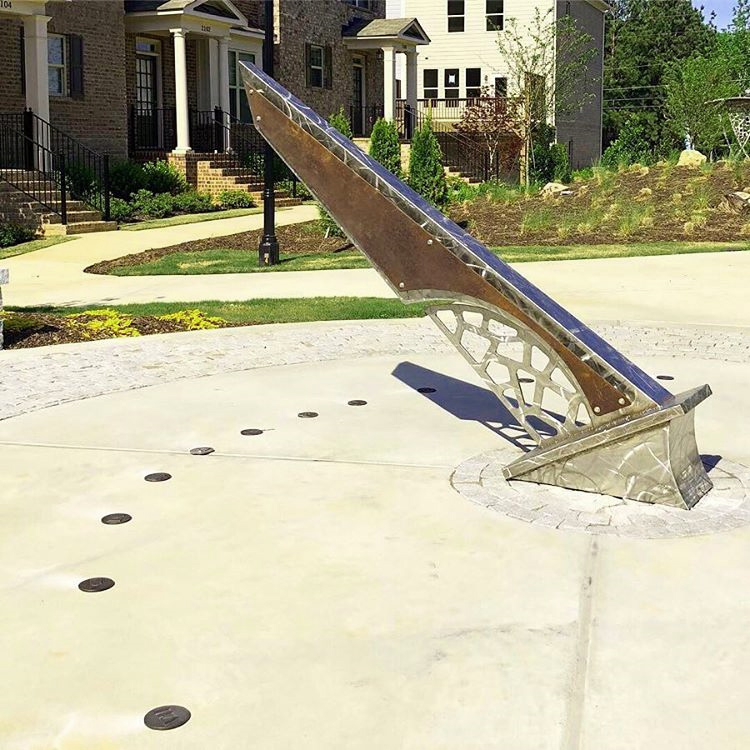 On May 3, 2019 new sundial graces the City of Kennesaw, Georgia just a short way from Atlanta. The Marietta Daily Journal reported the unveiling of the sundial, a large gateway sign, and a shade structure at the new townhouse site.  Developers of Kennesaw Gateway Park, a new group of townhouses within walking distance of of town center, collaborated with Kennesaw State University (KSU) to design and fabricate a 9-foot tall horizontal sundial that has been placed in the circular plaza of the housing common area. Page Burch, a lecturer of KSU's Master Craftsman Program was the lead coordinator to design and fabricate the sundial gnomon. The stainless steel gnomon has a brass verneer and an unusual tilted based that nevertheless results in the the gnomon angle of 34 degrees exactly correct for the site latitude.

Credit is also given to the KSU College of Science and Mathematics for calculating the gnomon angles and hour lines for positioning the hour-mark disks. These disks are embedded in a circular arc in the concrete. The 6am-6pm disks line up behind the gnomon mount, but again are correct when the style edge is followed to th concrete floor, precisely intersecting the 6am-6pm line. No noon-mark separation was used to account for the approximate 6-inch width of the gnomon. 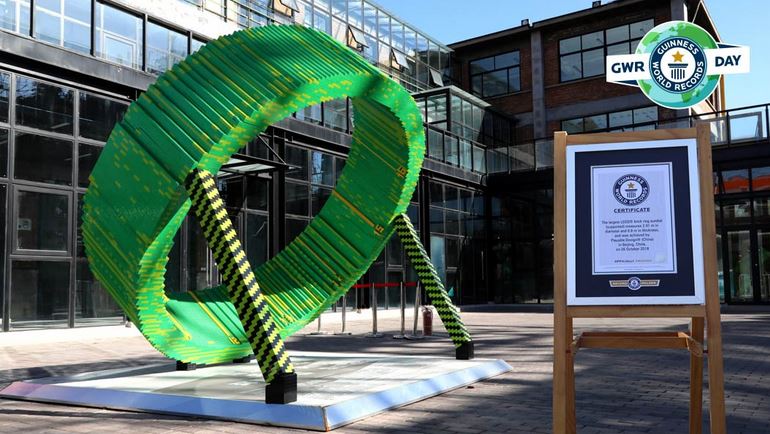 Back in March of 2012, NASS had an article about an inventive sundialist constructing a 62-LEGO block equatorial dial.  That now seems like ancient history.  In Beijing China, dialists have built  a ring dial 9 1/2 feet in diameter consisting of more than 45,000 LEGO blocks, setting a new Guinness World Record.

The dial was the idea of Mrs. Hou at Playable Design, a company that creates and develops eduational activities using LEGO construction blocks.  Astronomical professionals and structural engineers were enlisted to guide this three month construction project. According to an article from the on-line Guiness World Records website, Mrs. Hou (founder of Playable Design), says the giant ring sundial "... is a teaching tool that allows children to learn sciences across disciplines including astronomy, mathematics, history and cosmology.  Inspire children to think and ask questions, when they see the ring sundial, but we are all very excited to ber recognized by the Guinness World Records at the same time.... This is an important part of a public education project.  For creators and educators like us, the process of learning never stops."

See a time-lapse video of the dial's construction at: http://www.guinnessworldrecords.com/news/2018/11/45-000-bricks-used-to-create-largest-lego-brick-ring-sundial-for-gwr-day-546470 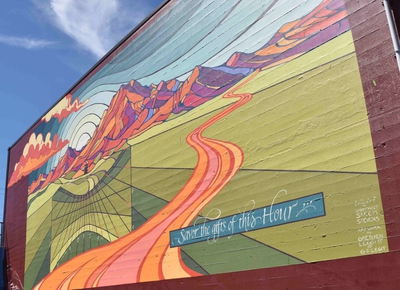 The Sundial Mural Project has been completed.  Sasch Stephens of NW Sunworks spent years putting this project together and in association with Allied Arts sponsored an international competition that ultimately commissioned Gretchen Leggitt to paint a beautiful 30' x 60' wall mural incorporating the dial. The bright and engaging sundial mural is located on the south facing wall of 207 Unity Street in Bellingham, WA.

The dial and mural will be dedicated at noon Saturday, September 22, 2018 which coinsides with the date of the fall equinox.  Called the "First Shadow Celebration" city council officials and noted sudialists will be present, as will Mataio Gills, co-owner of Ciao Thyme, the building that supports the mural and vertical dial. There will be music, entertainment, information about sundials, sundial kits, and a celebration of Solar Noon on the Equinox as seen on this major vertical sundial.

If you are in the Seattle-Bellingham-Vancouver area, head for the sundial dedication and First Shadow Celebration on the equinox, Saturday, Sept 22. 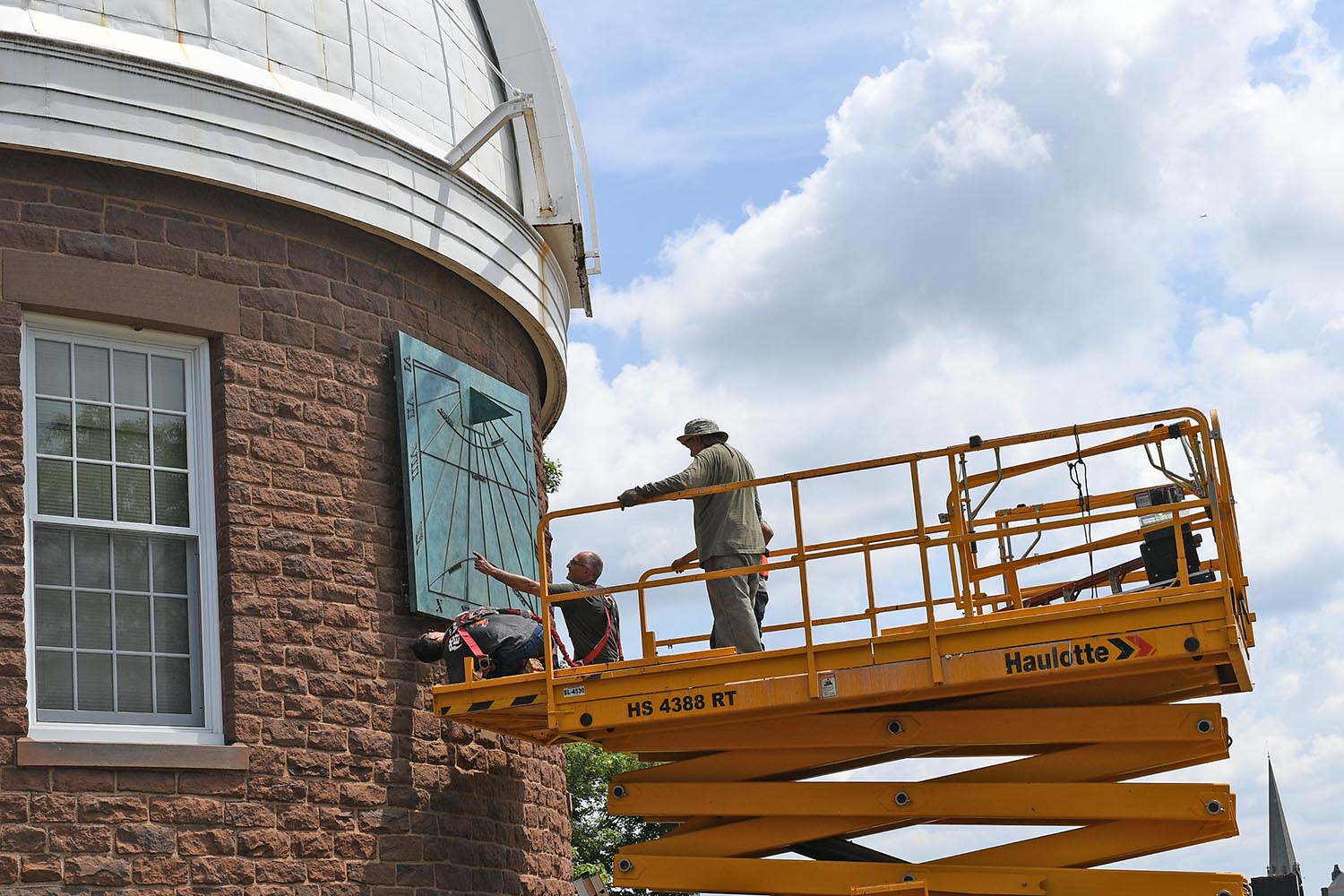 The Van Vleck Observatory has received a new sundial. In the Wesleyan news letter article by Olivia Drake who interviewed provost Joyce Jacobsen who said, "Campus doesn’t have enough outside art. A sundial is a perfect piece because it’s not only aesthetically pleasing but it’s functional too.”   (https://newsletter.blogs.wesleyan.edu/2018/07/17/sundial-sculpture-installed-on-van-vleck-observatory/)

The 6 x 6 foot Muntz metal bronze sundial with stainless steel reinforcing weighing 650 pounds was carefully installed on the southern face of the 20-inch Clark Refractor dome on Foss Hill, Middletown, CT. The Alvan Clark telescope now open for public viewing was installed in July, 1922.  In 1971 the Van Vleck observatory acquired the 24-inch Perkin reflector, housed in a separate dome near the west end of the old observatory building. (http://www.wesleyan.edu/astro/van-vleck/history.html)

The July 16th, almost exactly 96 years since the installation of the Clark telescope, the dome was graced by a sundial.  Installation was supervised by the designer and creator, Robert Adzema (standing on the platform).  He visited the campus multiple times with paper and wooden models seeking the right esthetic design. The final dial design is a true south declining sundial (notice the equinox line is parallel to the ground) but the hour lines are corrected for the longitude 72° 39.5585' W such that mean noon occurs 9m 22s after local mean noon.  Hence a slight counter-clockwise twist to the hour lines (the 6am hour line is slightly below the horizontal). The shadow of the gnomon's tip traces the solstices and equinox.  "I wanted the design to look timeless and in keeping with the classical nature of the building,” said Adzema.  In Drake's article Adzema further commented on the patina of the bronze dial, saying, "I chose this green because it is the natural color bronze would oxidize over time. It is also a shade that looks great against the color of the observatory’s brownstone walls...The biggest difficulty was achieving the patina, which had to be applied by heating the surface of the dial and applying various chemicals and acids.”https://newsletter.blogs.wesleyan.edu/2018/07/17/sundial-sculpture-installed-on-van-vleck-observatory/ 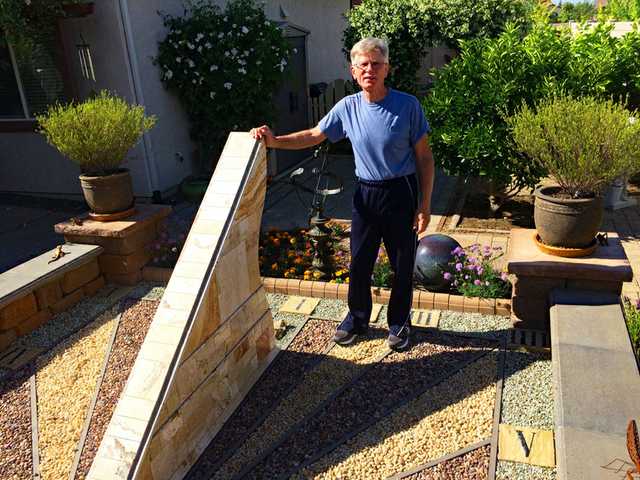 In a sunny corner of Ken & Molly Cooper's garden, located at their home in the Del Webb community of Manteca, CA, is an 8x12 foot horizontal sundial.  The hours lines are delineated by alternating light tan and red stone pebbles.  The hours themselves are squares of marble with Roman numerals from 6am to 6pm.   The 4 foot gnomon is about six inches wide, made of a concrete core and flanked with marble.  The hour lines are correctly laid out for a thick gnomon.

Surrounding the dial is a low brick wall decorated with lizards and butterflies.  According to Rose Alban Risso, correspondent for the Manteca Bulletin, "The central focus [of the garden], a huge sundial that took him hundreds of hours to make, is the realization of a childhood dream and fascination with astronomy. The two concrete spheres here were hand painted by the retired PG&E employee. One is designated as the night sky and the other represents daytime. An armillary time piece occupies another corner of the sundial..."