Louis B. Toomer and Sundial Remembered

In June 2018 the Georgia Historical Society dedicated a historical marker in Chatham Square to Louis B. Toomer, which read in part "Louis Burke Toomer, African-American leader, local bank founder, and realtor, was born in Savannah in 1897. Raised and educated locally, Toomer established the Georgia Savings and Realty Corporation on February 23, 1927, in the historic black business district on West Broad Street. During segregation, the company provided banking, investment, and insurance services for blacks who were not always allowed access to white banking establishments...." [1] 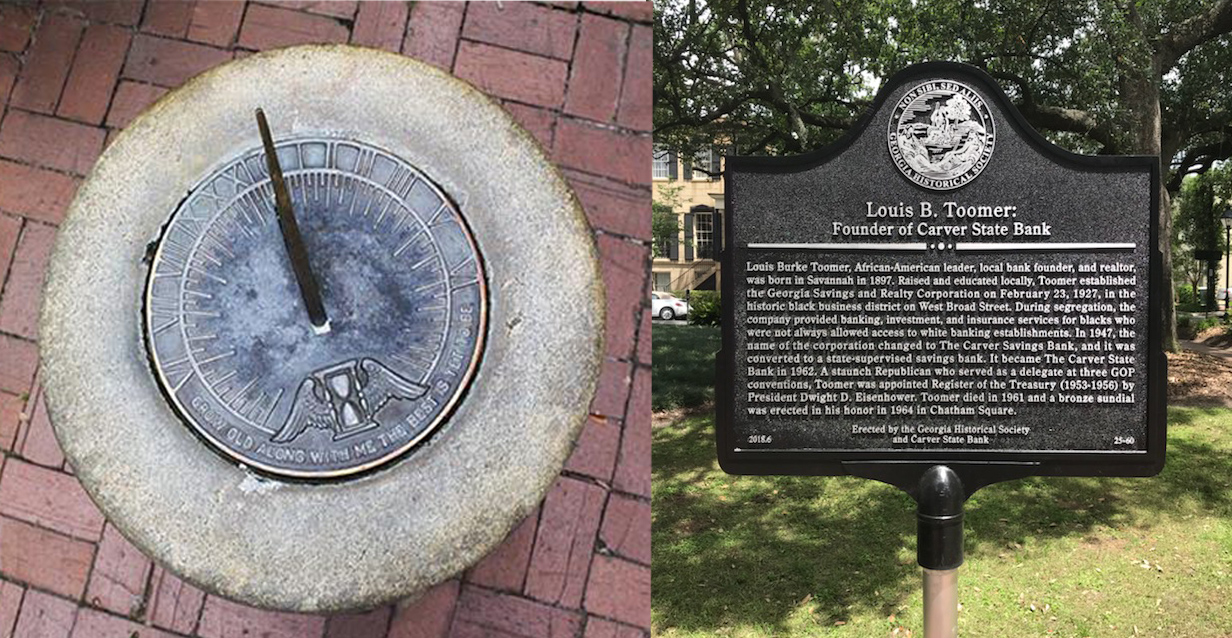 But before the historical marker was the Louis B. Toomer sundial in Chatham Square. As Georgia Wright Benton (past president of the Savannah Chapter of the National Conference of Artists) recalled:

"The sundial was dedicted in the spring of 1963 by the Savannah Chapter of the National Conference of Artists ... an organization comprised of black students throughout Chatham County along with their art teachers. West Broad Street School for black students was closed in 1962 and the pupils were transferred to Barnard Street School. Members of the National Conference of Artists visited the new school and one of our members observed that the park in front of the school, Chatham Square, needed improvement. Beautification of Chatham Square became a project for the organization, and the group decided to place a sundial in the square. We wanted something permanent that represented the black community in front of the Barnard Street school."

"The organization held several fundraisers to pay for the sundial. The primary fundraiser was a concert held in the Beach High School auditorium during the fall of 1962. Our concert artist was Kiah’s sister, a soprano singer. The fundraiser was a success and the sundial was purchased with help from Carver State Bank and Toomer’s wife, Janie. ... This sundial was the first dedication to an African-American in a Savannah square contributed by black students of a black organization." [2]

Over the years vandals have attacked and damaged the sundial. Each time, members of the Savannah-Chatham Historic Site and Monument Commission restored the sundial, " [making] a public plea for help and a reminder to the monument marauder that destruction of public property is a felony..." [3] You can see more of this dial in the NASS Sundial Registry (Georgia/Savannah #942).