This Sundials for Starters appeared in The Comendium in June 2010

Some years ago I had the thrill of reading the Tiberius manuscript1, which in Old English presented a horologium, a set of shadow lengths, from somewhere in England. The shadow lengths were given throughout the year, such as on Christ’s Mass day where “the shadow at [mid] morning and nine [halfway through the afternoon] is twenty [less] a heel foot and at midday four and twenty.” 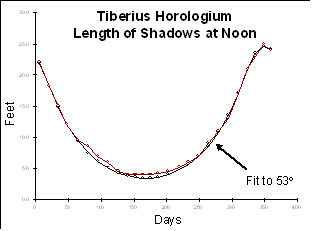 Fig. 1 shows the midday lengths of the horologium plotted against the day of year, showing that the monastery was somewhere near 53o latitude.

I was re-reading J.L. Heilbron’s book The Sun in the Church: Cathedrals as Solar Observatories [1999, Harvard University Press] and realized one thousand years later the Church still measuring the noonday sun with precision. In fact, by the 16th century, the date of Easter and the vernal equinox had slipped by around eleven days. Pope Gregory had decided on reforming the date of Easter in 1577 and by 1580 received recommendations of skipping a leap year every 400 years from his commission on the calendar.

How do you measure the length of the year or the tilt of the sun’s obliquity? With patience. Egnazio Danti mounted a quadrant on the face of Santa Maria Novella Cathedral in 1574 to measure the length of the year in support Pope Gregory XIII’s calendar reform. Not long after he proposed a larger instrument for the Florentine cathedral: a Meridiana, a meridian line where a noonday sunspot on the floor could mark the changing seasons. Danti knocked a hole in the south façade of Santa Maria Novella 21.3 meters above the floor to let the sunlight fall into the church.

According to Heilbron, “Danti expected that the sun’s noon image on the day of the first vernal equinox after he completed his meridiana would be centered at a point close to 22.37 meters from the façade (‘close to’ because the equinox can occur at any time of the day). It would then move south [as the sun moved toward summer and appeared higher in the sky] coming to within 10.36 meters of the front wall on mid-summer day; recede toward the equinoctial position; continue beyond it a long way, to 57.96 meters [at the base of the choir stalls] on midwinter day; and move once again toward the equinoctial station…thus [Danti] said it would be easy to find the year and the true time of Easter.” Unfortunately, the meridiana was not completed due to a change in Church politics: Danti was exiled from Florence two weeks after the autumnal equinox of 1575. 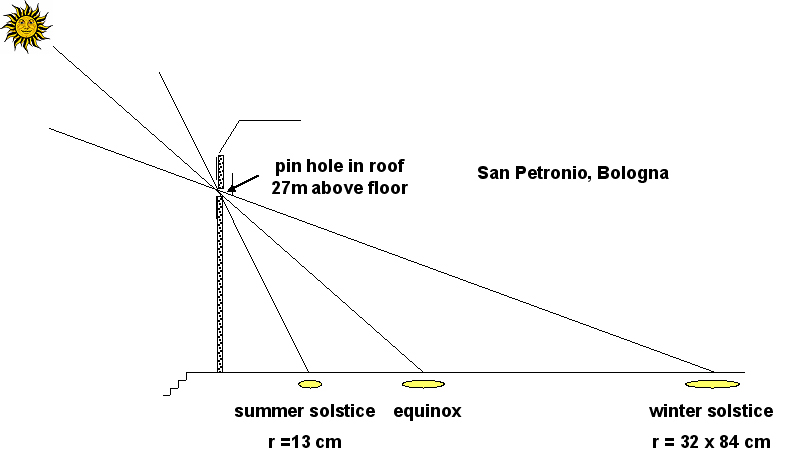 Danti was not deterred and convinced the council of church maintainers in Bologna that San Petronio was an ideal candidate for a meridiana. Danti made a hole 65’ 9” in Bolognese measure above the pavement, as shown in Fig. 2. In the late 16th century the sun’s obliquity was 23.50o, about a tenth of a degree greater than it is today. At latitude 44o 30’ the angle of the sun on the floor of San Petronio changes from only 17 at winter solstice to 64o at summer solstice.

Unfortunate for Danti, support pillars of the cathedral were in the way and he had to compromise by putting the meridiana nine degrees off north.

Danti’s meridiana were neither the first nor the last that would be built. Perhaps the most famous was Brunelleschi’s masterpiece dome of Santa Maria del Fiore, where in 1475 Toscanelli poked a hole in it 90 meters from the ground. At such a great height, the sun’s image is only visible near the summer solstice where Toscanelli attempted to measure changes in the inclination of the earth’s tilt (the obliquity). However, meridiana alignments depend not only on celestial mechanics, they depend upon the integrity and stability of the church’s own structure. Heilbron notes: “Indeed, the architects and engineers responsible for the maintenance of the cathedral read the meridiana to determine the state of the building, not of the ecliptic, while a few astronomers tried to use it for its original purpose.”

In Rome in 1580 Danti was busy creating a set of maps of the world (mappamundo) for the Pope at Belvedere. At Belvedere, Pope Gregory built a Torre dei Venti, a tower of the winds. “On the top floor of the tower, beneath the wind gauge [an anemoscope to measure the direction and speed of the wind], Danti inscribed a meridian line…The line itself indicates the position of the sun’s image at entry into the zodiacal signs from Cancer only down to Scorpio/Pisces, the room being too small to admit the images for Sagittarius/Aquarius and Capricornus. To fix the position of Cancer, Danti used the value of  = 23o 29’… According to an old story, Danti’s demonstration to Gregory in the Torre dei Venti that the equinox occurred on 11 March rather than on the canonical 21st convinced the Pope of the need to reform the calendar. In fact, Gregory had decided on the reform in principle in 1577 and had received the report of his special commission on the calendar in 1580, before Danti’s line went down in the Torre dei Venti.” But it makes a good story. 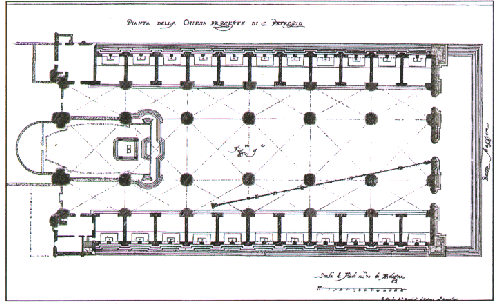 Nearly 100 years after Danti’s meridiana at San Petronnio in Bologna, Giovanni Domenico Cassini (the first of the Cassini dynasty to rule the Paris Observatory for over a century) created a new meridiana in the Basilica. Creating a new south wall and properly aligning the meridian line north-south (Fig. 3) …at a cost of 2,500 lire.

And sometimes fiction gets in the way of truth. In the Da Vinci Code, Dan Brown gives the merdian line of Saint Sulpice as the Paris Meridian of zero-longitude. As with the other meridiana, this one too was used to determine the winter solstice and Easter.

Here are some famous Meridiana, their constructors and their cathedrals:

The obliquity of the ecliptic slowly changes, with a small nutation term thrown in for good measure. The mean obliquity can be calculated using a term we call Julian Centuries of 36525 days and the Julian Date as follows: 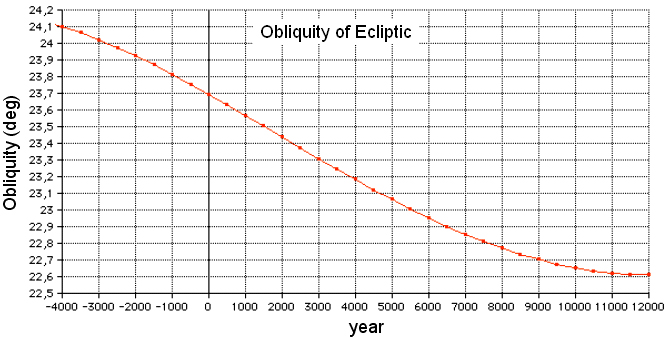 and computing the mean obliquity using the polynomial

In addition to the mean obliquity, there is a more rapid nutation term with a period of about 34 years. This is sometimes referred to as the obliquity correction, : 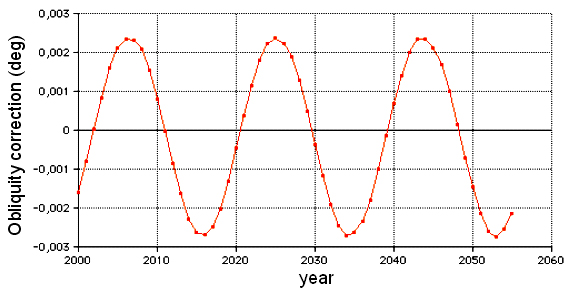 and the total obliquity becomes

An Angelic Line in Rome: http://www.perillos.com/rome_line.html