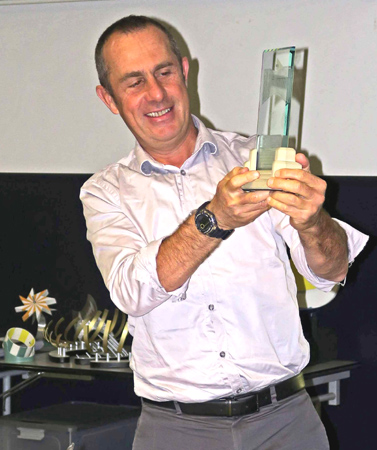 This year's Sawyer Dialing Prize was awarded to Dénis Savoie at the NASS annual conference in Denver, CO.  The certificate recognizes Dénis "for his long career of education, reserarch, and publications related to gnomonics and his outstanding portfolio of public sundial designs and restorations."  Early in his career Dénis was significantly influenced by Morando, who was excellent at calculating planetary motions and played an important part in the reduction of astrometry data from the Hipparcos satellite. In his honor, asteroid 5702 was named Morando thanks to the submission by Dénis Savoi and Jean Meeus, and endorsed by L. D. Schmadel.

Dénis has designed many large sundials, including the giant "Nef Solaire" on the A9 motorway near Tave. Dénis has done many projects with Marc Goutaudier, including the creation of a sundial on the top of the SEIS Seismometer on the InSight mission to Mars.  The sundial provided precise orientation of the seismometer using a unique shadow calibration ring.

At the fall annual meeting of the Commission des Cadrans Solaires - a subgroup of the Societe Astronomique de France - on 16 Nov 2019 the President of CCS, Philippe Sauvageot, presented Dénis with the traditional Spectra Sundial by Jim Tallman of Artisan Industrials and the Sawyer Dialing Prize certificate.  He already received the Sawyer Award Prize of $200.