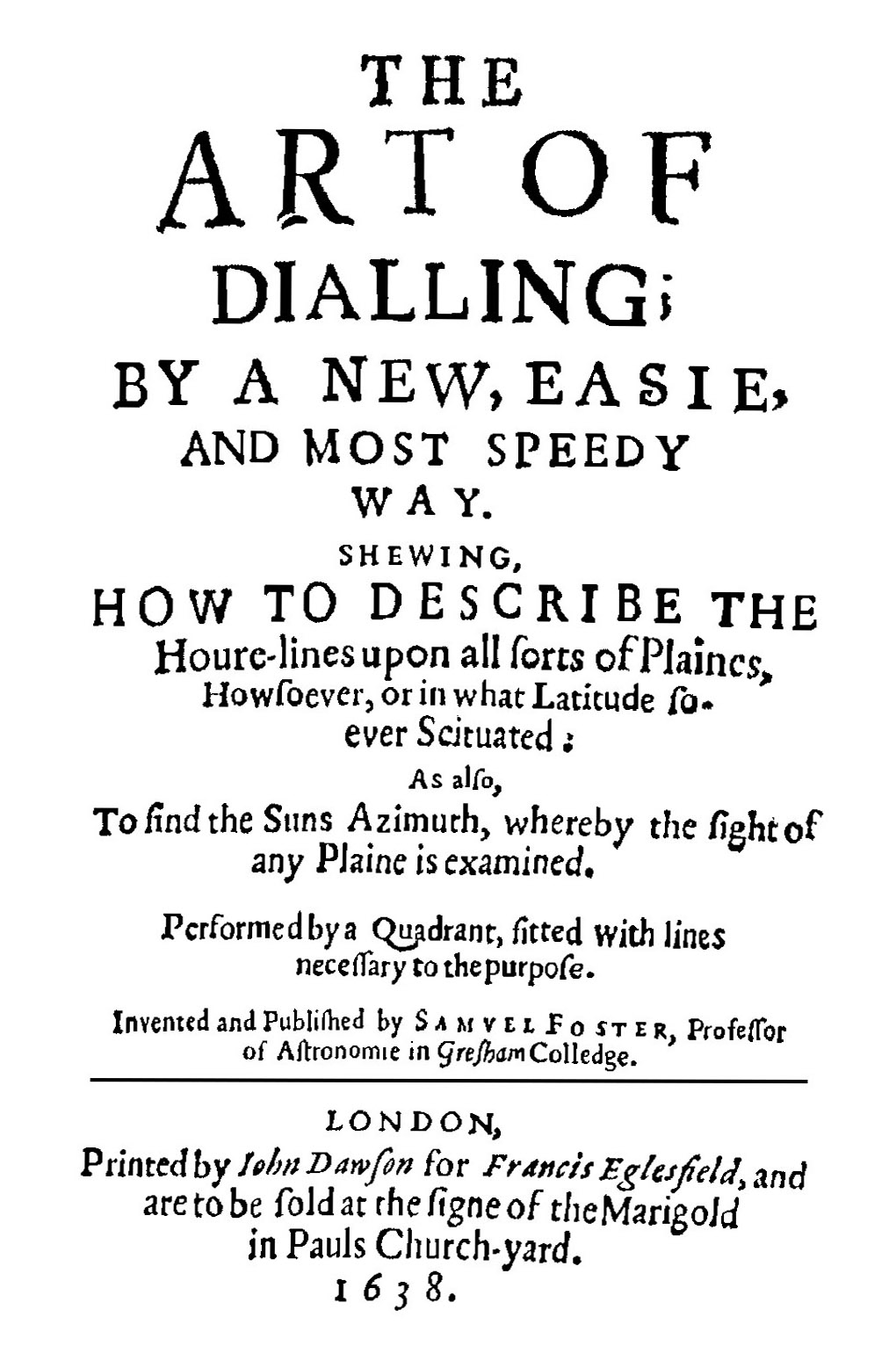 Samuel Foster. THE ART OF DIALLING; BY A NEW, EASIE, AND MOST SPEEDY WAY.

"SHEWING, HOW TO DESCRIBE THE Houre-lines upon all sorts of Plaines, Howsoever, or in what Latitude so-ever Scituated; As also, To find the Suns Azimuth, whereby the sight of any Plaine is examined. Performed by a Quadrant, fitted with lines necessary to the purpose. Invented and Published by SAMVEL FOSTER, Professor of Astronomie in Gresham Colledge LONDON, Printed by John Dawson for Francis Eglesfield, and are to be sold at the signe of the Marigold in Pauls Church-yard. 1638." (50 pages, 1.9 MB)

Also, in non-facsimile form, NASS presents with a paragraph-by-paragraph collation with the earlier edition [above] is the second edition of Samuel Foster's THE ART OF DIALLING. This edition provides "several Additions and Variations of the Authors, deduced from his own Manuscript. With a SUPPLEMENT, Performing all the Instrumental Work of the Quadrant, by Calculation. By help of the Canons of Sines and Tangents, which of all ways is the most Exact. By WILLIAM LEYBOURN Philomath. LONDON, Printed by J.R. for Francis Eglesfield at the Marygold in St. Pauls Churchyard. 1675." (60 pages, 0.8 MB)

This can be ordered from LuLu Books: Foster: Art of Dialling (1638)

The first edition of this book is probably the only one of Foster’s works that he lived to see published. The second (and third) edition appeared 37 years later when William Leybourn published a version based on Foster’s manuscript notes for a revision.

This book is the first to introduce the use of dialing scales in the layout of dials; it also includes a little known circular instrument that Foster invented as a precursor to the circular nomograms of the twentieth century. The technique Foster uses to draw dials on arbitrary planes amounts to treating every dial not as a horizontal at a different location, but as an inclining direct east/west dial at a different location. Each edition focuses on a quadrant Foster designed specifically to aid the dialist. It is interesting to note that the quadrant of the 1675 edition is significantly different from the earlier version; it uses half as many lines but accomplishes the same tasks.

The second edition concludes with an addendum by Leybourn, showing how all the work of the book can be accomplished by direct calculation. "READER, Here is presented to thy view a short and plain Treatise; it was written for mine own use, it may become thine if thou like it; The subject indeed is old; but the manner of the Work is all new. If any be delighted with recreation of this nature, and yet have not much time to spend, they are here fitted, the Instrument will dispatch presently. If they fear to lose themselves in a wilderness of lines, or to out-run the limits of a Plain, by infinite excursions (two inconveniences unto which the common wayes are subject) they are here acquitted of both, having nothing to draw but the Dial it self, contracted within a limited equicrural triangle. If want of skill in the Mathematicks should deterr any from this subject, let them know, that here is little or none at all required, but what the most ignorant may attain. If others shall think the Canons more exact, so do I, but not so easie to be understood, not so ready for use, not so speedy in performance, nor so well fitting all sorts of men: and withall an Instrument in part must be used, this will do all, and is accurate enough. If it must needs be disliked, let a better be shewed, and I will dislike it too; It is new, plain, brief, exact, of quick dispatch. Accept it, and use it, till I present thee with some other thing, which will be shortly."