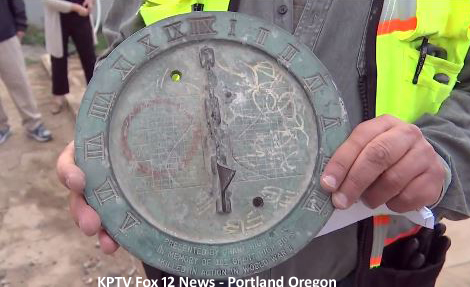 In Portland Oregon during the rennovation of Ulysses S. Grant High School an old brass sundial with only the remenant of a gnomon stood on a concrete pedestal ready to be turned into scrap metal and dust.  But now according to Portand KPTV "a group of veterans want to bring it back similar to its original state."  The dial, about 8 inches in diameter with Roman numerals from 5am to 7pm has the engraved inscription "Presented by Grant High School in Memory of the Grant High Boys Killed in Action in World War II"

KPTV Fox News 12 reporter Tyler Dumont interviewed Daniel Thompson, "We're going to restore it and make it a part of the future of Grant High School,"  He and other contractors, all veterans, formed a group to restore it for the school's opening in the summer of 2019. Thompson continued, "As a veteran, all the veterans feel like remembering the wars that were fought and the wars we're still fighting - it's important that everybody, every student, does not forget that."

Tyler Dumont  summed it up: "A historic piece of patriotism and honor at Northeast Portland’s Grant High School: this sundial is in memory of 101 former Grant students that were killed in World War II. After years of vandalism & aging, a group of veterans are set to restore it." pic.twitter.com/5NsibjDTfp

See KPTV's video of the sundial and interview at: https://www.kptv.com/news/group-restoring-historic-sundial-honoring-veterans-at-portland-high-school/article_9d2d432a-b52d-11e8-a26e-c3d447a6d595.html