Some years ago Bob Terwilliger built a Laser Trigon, an instrument that assists in drawing sundial lines on irregular shaped objects. For more about the Laster Trigon, see The Teacher's Corner - Sundial Projects. Here is the story of how he used it to create a bathtub sundial and after some years of service, how the sundial met its end.

The laser projects a beam of light to draw the lines and curves of a sundial onto any surface. To test the capabilities of his Laser Trigon, Bob decided to build a large combination vertical and horizontal sundial in his Florida home backyard … with some unusual consequences.  Here is his blog, taken from “A Dialist’s Notebook – The Shadow Garden”

The Shadow Garden is an area in my back yard set aside for experiments in building sundials. The dials are transient, and all were made from found objects. Some are being built for fun - others to experiment with a method of construction. 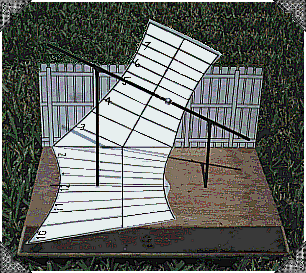 Instead of putting a sundial in your garden, why not put a garden in your sundial? I am hoping the result [using the Laser Trigon] will be a fascinating and unpredictable garden of objects, some bearing hour lines, some numerals, some both, many neither. As the sun defines the day, its shadow will wend its way among them, anointing those it chooses with the power to tell time.

The first step is to make a working model. I need to get a feel for the relationship between the position of the gnomon and the west-facing board fence. The model consists of two planar dials, a horizontal dial joined to a direct west vertical dial. These surfaces will not be obvious in the finished dial, as the lines and curves will be located on the objects lying within the dial itself.

The Horizontal Dial is limited by the backyard space, such that only to the hours from10am-2pm will be seen, while the Vertical Dial to be attached to a north-south running fence will display the summer shadows to 8pm.

Next I installed the gnomon, which is made of fencing tubes and associated tee and elbow hardware. I temporarily located hour and half hour indicators on the ground by marking piles of whatever I could find.  The markers show the appropriate local solar time.

The hour line timing for this was done [with a now old] computer program, The Dialist's Companion, written by Fred Sawyer and myself for the North American Sundial Society. [Today a number of sundial calculators are available for your choosing, including:] 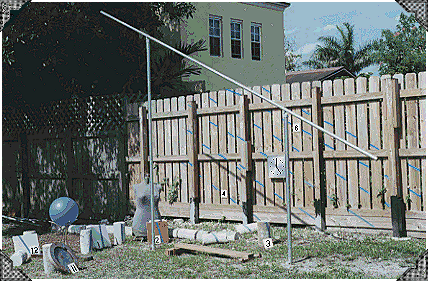 A few of the objects I found to show local solar time (along with much pre-existing trash) are shown below the dial gnomon.

I have to rethink this dial. If you take a look at the full size photograph, I think you will agree that the scale of the objects I used are too small for the size of the gnomon and the overall garden area.  I am going to have to find larger objects, or settle for a design that uses less shadow receiving surface. 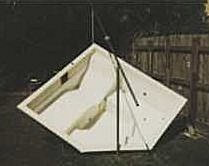 I may have solved my problem. I found a derelict fiberglass hot tub … a discarded Jacuzzi bathtub… which has a suitable variety of surfaces and angles. Instead of many small objects, why not one big one? Tipped up on an edge, it fits almost perfectly between the posts outlining my desired dial area.

The hot tub has been tilted up facing south. It sat naturally in this position, but I provided further support so that I can walk on it without the tub moving. Drainage is provided by drilling holes in the apparent low points of the tub.

In preparation for realizing my dial, I tested the Laser Trigon on the tub. Sadly, the original laser was not bright enough to properly illuminate the surface. I have now acquired a much brighter laser, which I’m installing in the Trigon. The problem of mounting the Trigon has, in principal at least, been solved. 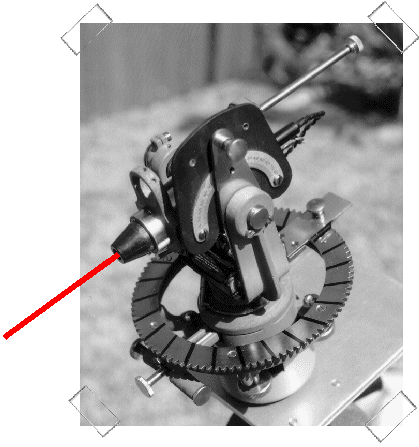 The new laser has been installed and it gives a perceptible dot. The mounting also works well, and I’ve already laid out the morning hour lines. I’ve scanned some Polaroid photographs to show the results.  The dial is being built for latitude 25° north, longitude 80° west.  My dial will include a longitude correction for the offset from the Eastern Time Zone at 75° west.

I’m using a sturdy tripod with a V rest on top and placed inside the tub as if to support the gnomon. Next, I’ll remove the gnomon and replaced it with the Trigon, which has been mounted on a length of the same tubing used to make the gnomon. The instrument and its tubing will be secured to the gnomon support post and rest on the tripod.  I’m including a photo of the Laser Trigon mounted on the tubing.

The instrument has replaced the gnomon and is positioned so the center of the axes of rotation is at the desired point of the nodus, a point that can be used to project the solstice limits of summer and winter and the mid year equinox line. The nodus point was somewhat arbitrarily chosen, but is close to the actual position of the nodus that will be determined more precisely by its shadow on the upcoming equinox. Another view of the process. Pepín tries his hand at the laser.

We start work at twilight, as the tub is too hot when in direct sunlight. This is our second session. Some of the lines have already been laid out and taped. I am directing the laser, Pepín is marking the position of the dot. The morning lines and three lines for declination are finished. The gnomon is back in place. The winter solstice and the equinox can be seen. The summer solstice is there, but it falls inside the tub. The lines are applied with 3M "Long Mask" masking tape. Hours and half-hours run through the tub. Quarter-hours are marked along the edges. 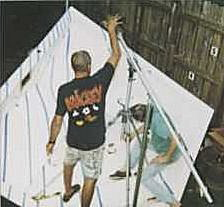 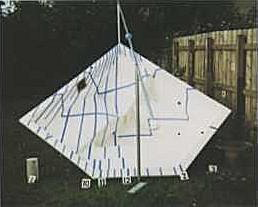 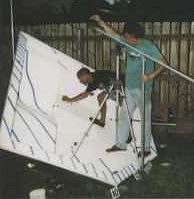 Interesting? It works for me.

During a windstorm yesterday, a heavy extension ladder blew down and fell on the gnomon that fortunately had been removed and placed on the ground for safety!  The gnomon was bent and will have to be replaced.

I have designed some numerals, which will be cut from vinyl by a signmaker who cuts custom letters with a plotter. The numerals will then be applied directly to the fiberglass. Gaps can be seen in the photo below for the numerals 1, 2, and 3. The time shown on the dial is just before 12:15 (the sharp eye will note - a bit after the equinox). The little numerals at the bottom are temporary. 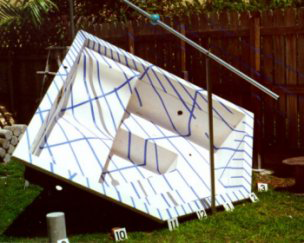 After six days without sun, I was finally able to photograph the finished dial.  View from the south. The time is just before 11:45.  The flags are those of the State of Florida and the United States of America. 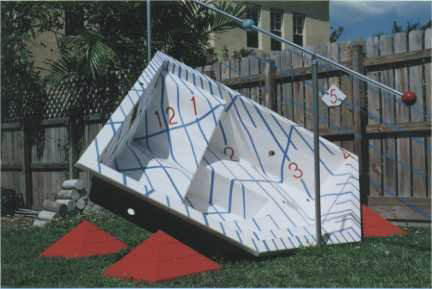 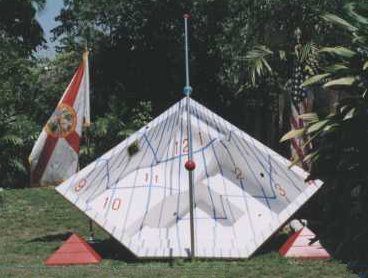 This calls for A Party. Click the audio panel below and listen to the Beatles' Here Comes the Sun. 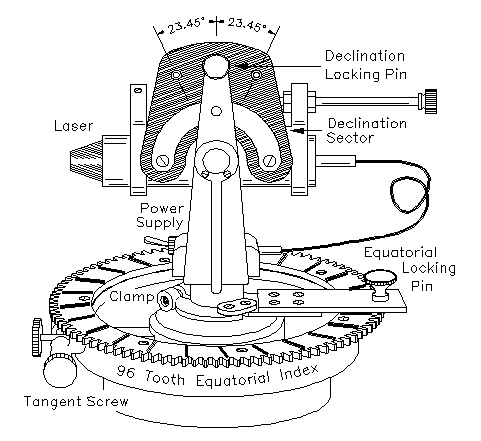 The hour lines were consistently accurate during the entire season. The taped lines themselves have faded slightly.

When making the Laser Trigon with my small clockmaker's machinery I encountered some problems laying out and machining the parts of the device necessary to produce the seasonal lines and curves. On the finished dial the winter solstice and equinox were reasonably accurate, the summer solstice less so. A bit of "tweaking" of the position of the nodus brought all the seasonal shadows within a half-inch or so of dead center. The results of the experimental dial were satisfactory, and some improvements to the seasonal adjustments of the Laser Trigon will produce an instrument which will, as advertised, "draw a sundial on a Buick".

The dial was completed in April of 1997. After 3 years in the direct sun, the dial has decayed. The masking tape lines have faded and washed away. I made an attempt to put vinyl tape over them, but it would not stick. Weeds have grown up through the drainage holes. Since the dial is in Florida I have filled it with concrete cylinders to prevent it blowing away during a hurricane. (I have always been amused by considering what an interesting UFO the dial would make should it fly away, and what the people who found it might think of it.)  Fortunate for all, it has stayed put. 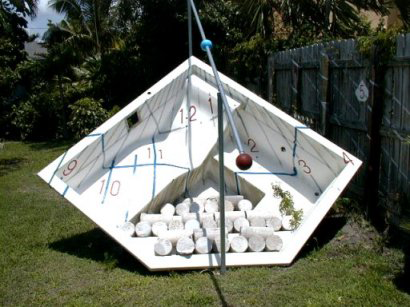 Installation and removal of the concrete cylinders during previous hurricane seasons had thrown the dial slightly out of alignment. It had never been secured to a foundation and I have always considered it temporary. The dial has survived three years without experiencing a hurricane, and I felt the odds might be against it surviving another.  In April, 2000 we took the hot tub dial down. 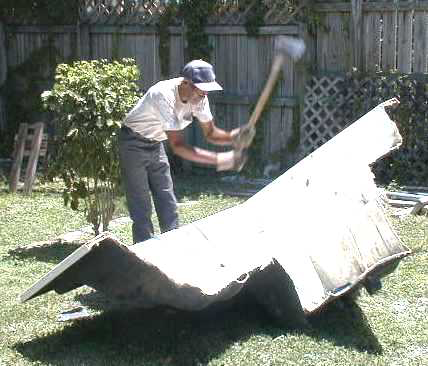 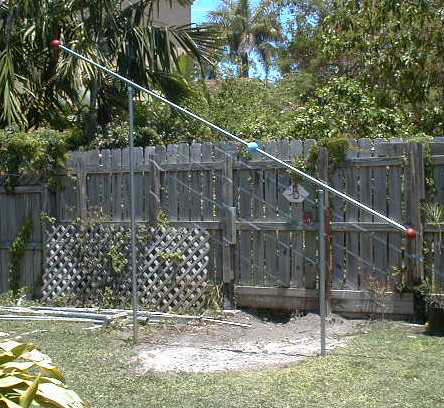