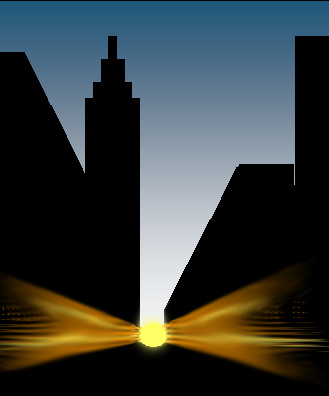 One of the more interesting news items over the last several months has been the “Manhattan Henge” craze.  Neil deGrasse Tyson, director of the Hayden Planetarium in New York, calculated the alignment of the sundown the street corridors of Manhattan (Fig. 1).  For New Yorkers, two opportunities for alignment occur.  The streets are aligned 28.9o east from North, and the sun sets near this at this azimuth on May 30-31 and July 11-12.

These alignments are just a small part of “shadow planes” where the shadow of the sun aligns with a building wall or other object.  The best description of shadow planes comes from the NASS expert, Mac Oglesby and his compatriots William Maddux and Fer deVries in a series of three articles in The Compendium.[1]

Some time ago I had the good fortune to work on the alignment of a Corn Henge (Amazing Maize Maze) at Long Acre Farm (latitude  phi = 43.1o in Macedonia, New York [2].  Fig.  2 is a top view of three rows of corn.

The principles of a shadow plane are easy using the familiar formula for the hour lines of a horizontal sundial:

When used with the horizontal dial hour line equation above,

From Fig. 2 above, we see that the shadow alignment remains constant throughout the year for the same local solar time, in this case giving a constant shadow width (not length) of 3.8 feet for a row of 10 foot high corn stalks. Next, let’s determine the limits of alignment for the azimuth of corn rows capable of pointing to the setting sun.  The angle is limited by the sun’s north and south excursion on the Ecliptic (23.4o), with the summer and winter Solstice as the limit, allowing no more than

which, for the Macedonia corn rows becomes

AzWest is the azimuth of the corn rows measured westward of north.  So there is a fairly broad range of alignments that could be made.  Unless the corn rows are pointed to the limiting summer solstice +23.4o, there will be two days during the year that can be declared “Corn Henge Alignment Day”[3].

For a particular corn row or city that does have an alignment between the solstice extremes, when do those days occur?  This is a bit more complicated. 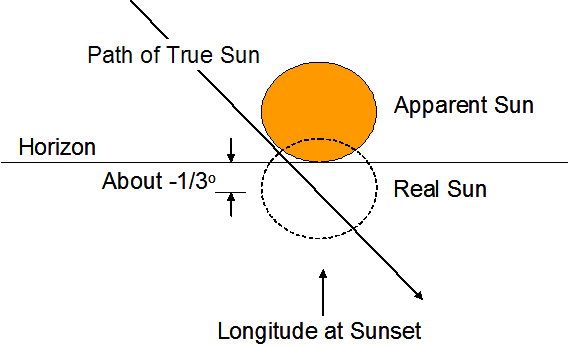 To begin, as readers may recall when I discussed the Cahokia Indian mounds[4], we were looking for sunrise “first light” and the azimuth alignment between the observer’s post near the center of a large circle of outer tree posts.  The situation was complicated by bluffs on the horizon as well.  Here, we shall settle for the sun just resting on the horizon with the flattened image of the sun in full view. (Be careful, since directly looking at even the setting sun can damage your eyes.  Use your camera or a pinhole projection instead).  Because of refraction, the center of the sun is below the horizon at an elevation angle of z = -0.3165o when the apparent lower limb of the sun just touches the horizon.  (Fig. 3) When the last flicker of sunlight disappears (our normal definition of sunset), the center of the sun is about 0.83o below the horizon (z = -0.83o).  For more about atmospheric refraction effects, go to the NOAA website.[5] To account for this, a more exacting equation for solar azimuth is needed that includes the sun’s true elevation:

We now have a relation between corn row or street azimuth, measured westward from north that depends upon latitude and the sun’s declination for the day(s) of the year on which the henge alignment occurs.

Start by creating the angle gamma (in radians) based on the day of the year and hour of the day:

Then the solar declination (delta) in degrees can then be approximated by the polynomial:

and using another polynomial, the solar Equation of Time (in minutes of time) can be approximated :

The streets of Manhattan are aligned 28.9o east from North means that the streets are also pointed 151.1o west of north, and is outside the limits of the setting sun.  However, the cross streets point 61.1o west.   With the elevation angle of the setting sun at  z = -0.3165o, we get

Table 1. shows the resulting azimuths for sunset with the lower limb just touching the horizon.  Our approximate formulas show that the best match for streets aligned 61.1o west  occur between May 28th and May 30th and also between July16th and July 19th.  We’re several days off from Tyson’s calculations, but it would be exciting to see the Manhattan “Henge Alignment” in any event.   Try a street of your own  and see if there is a “Street Henge” near you.

[3] Note that due to the growing season of corn, expecting a 10-foot corn row in December during the winter solstice is highly unlikely.  In fact, the ideal time of having a  corn row in alignment is from July until the beginning of October.