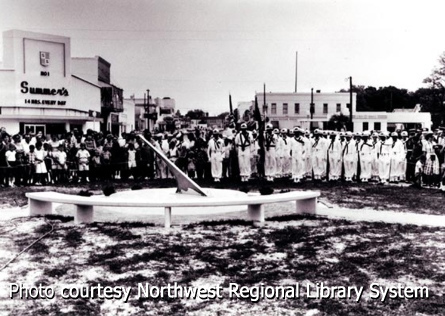 Many sundials do not survive the raveges of time.  Buildings are destroyed and the sundial goes to oblivion.  However, Panama City Commissioners had a different view of the sundial once located across from the Marina Civic Center.

William Whitson, Director of the Community Redevelopment Agency addressed the public during its recent meeting, as and recorded by Zack McDonald of the News Herald, "We always knew the sundial would be part of the redevelopment. But recently some of the info we've unearthed is pretty unusual."

Underneath the sundial, encased in concrete, was a section of a periscope captured from a German U-Boat.  It was made into a 600-year time capsule, filled with nitrogen to protect its contents. The capsule, 6 inches in diameter and 18-inches long, was deposited beneath the sundial on Armed Forces Day May 18, 1963 to be opened 600 years hence in 2563.

The News Herald reported that "In 1963 the personnel of the Navy Mine Defense Laboratory gifted the sundial and the time capsule to the city. The sundial was chosen because of its timeless character in depicting the enduring relationship between the city and Navy."

The 9-foot diameter terrazzo sundial has a large "USN" on the North East quadrant edge of the concrete dais.  On the off-white surface is a bronze tapered gnomon moved slightly to the south of center. Hour lines radiate from the gnomon foot and small arabic numerals grace the outer top edge of the dais. The sundial and its plaque of the Equation of Time is being moved to a new location near the Panama City "splash pad".  The 600-year time capsule will presumably be once again located underneath the sundial.