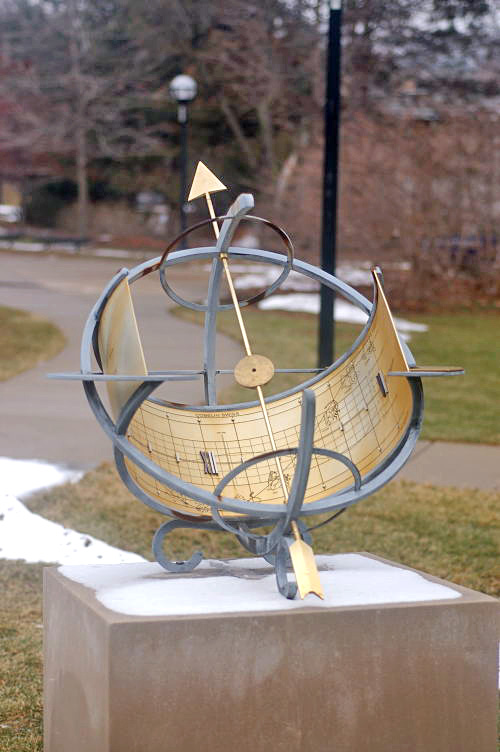 If you look in the NASS Sundial Registry at Dial #617 from Ann Arbor Michigan you will see a lovely equatorial sundial on the grounds of the University of Michigan North Campus near the College of Engineering buildings.  The dial exists only as a photo and a memory.  Last April between the 13th and 15th it was stolen according to the Detroit Free Press.

The bronze equatorial dial has a circular nodus on the polar gnomon arrow to mark the seasons on the broad equatorial band.

Markings are in French (Solstice D’Hiver, Solstice D’Ete, Equinoxe de Printemps), Roman hours enumerate only the hours of VI, XII, VI and the dial face has etched zodiac figures running across a diagonal ecliptic in accordance with the seasons.  Unfortunately the base was built more for artistic appeal than vandal protection. The dial was apparently ripped off its pedestal by removing three attaching bolts.

The dial was set in the Wave Field courtyard outside the Francois-Xavier Bagnoud Building.  It was a gift to the University in 1993 by Albina du Boisrouvray in memory of her son Francois-Xavier who died in 1986 at age 24 on a helicopter rescue mission in Mali according to the Free Press.  The dial was built by Gubelin Swiss.  According to the University, the sundial has more artistic and sentimental value than monetary, but they would like it returned.  They are offering a $200 reward for information leading to the recovery of this 3-foot, 50-pound bronze dial.  Anonymous tips should be reported to the university's tip line at 800-863-1355 or with university police at 734-763-1131.