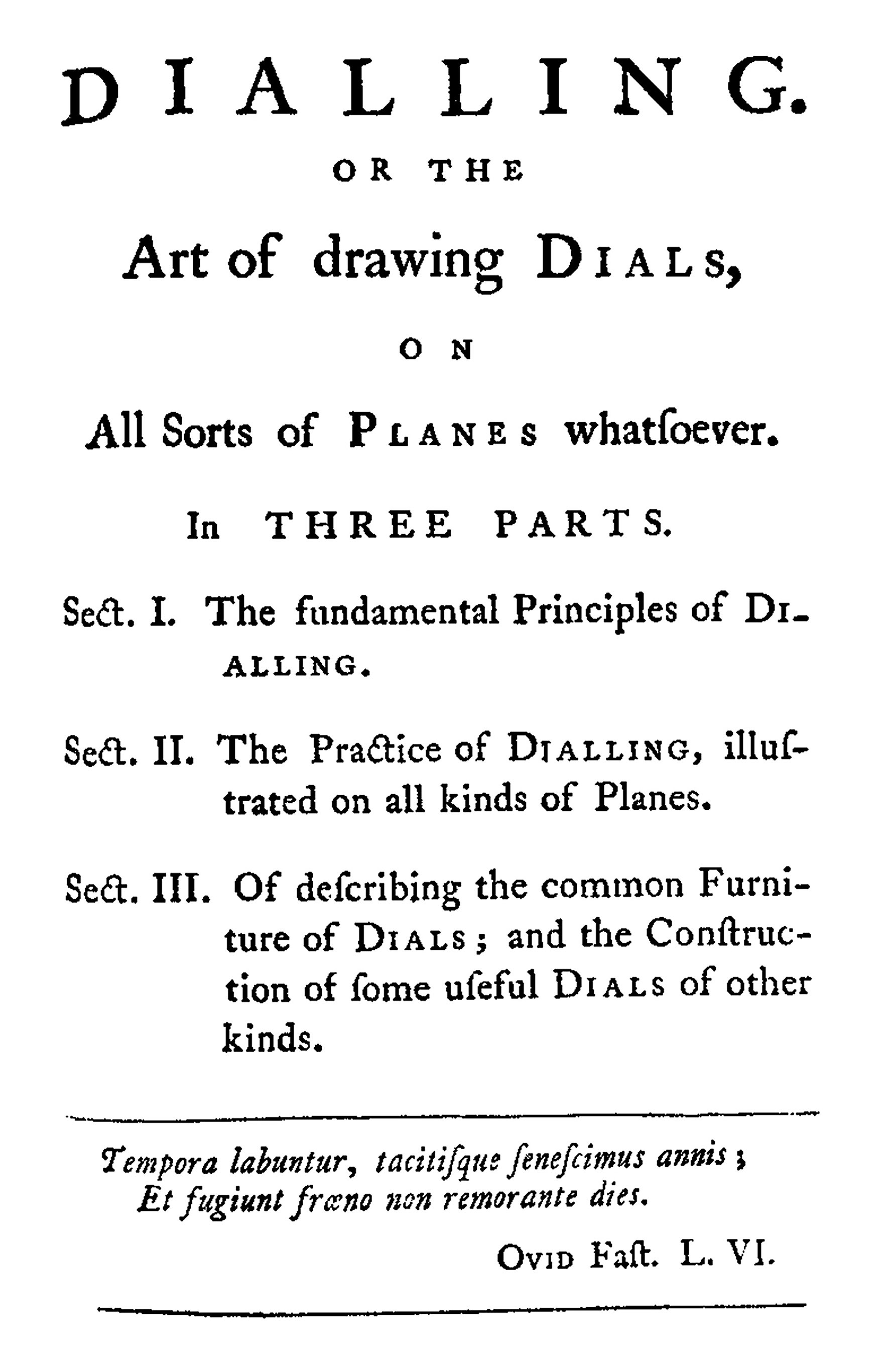 William Emerson. DIALLING or The Art of drawing Dials, on All Sorts of Planes whatsoever.

"In Three Parts. Sect. I. The fundamental Principles of Dialling. Sect. II. The Practice of Dialling, illustrated on all sorts of Planes. Sect. III. Of describing the common Furniture of Dials; and the Construction of some useful Dials of other kinds. London. Printed for J. Nourse, in the Strand; Bookseller in Ordinary to his Majesty, 1770."  (206 pages, 10.7 MB)

Emerson (1701-82) was a schoolteacher and mathematician. He eventually gave up teaching and lived on the income from a small inheritance so that he could devote his time to study. He became an author well known for his “comprehensive grasp of all existing knowledge in all branches of his subject”. He published a defense of Newton’s Principia and authored a textbook on fluxions (calculus). Even 80 years after his death, “the works of this able mathematician…[were] still in high estimation”. The current work was originally bound with Emerson’s The Mathematical Principles of Geography. "[T]he first section contains the grounds of this art; by shewing, how the several requisites are to be found, by the intersections of the circles of the sphere, with the plane of the dial, from the principles of spherical trigonometry; from which the practical rules are deduced. The second section contains the practice, and that three different ways. 1. Geometrically, by rule and compass, which depends upon the gnomonic projection of the sphere… 2. By trigonometrical calculation, by the tables of sines and tangents, which is the most exact way. 3. By the lines upon Collin’s Dialling scale, which is a method extremely easy and ready. The third section shews the way of making some other sorts of dials; and drawing the furniture upon any common dial; that is the projection of the several circles of the sphere; and inserting therein, such hours as have been used by other nations. And tho’ these things are not absolutely necessary, they may serve sometimes as an ornament for a dial."

This can be ordered from LuLu Books: Emerson: Dialling Or The Art of Drawing Dials (1770)