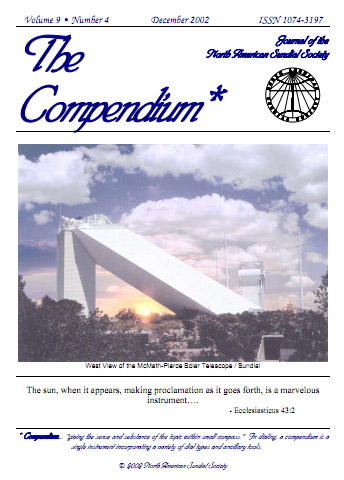 This issue begins with several articles about shadow sharpeners, the ability to change the penumbral edge of a shadow that is created by the fact that the sun is a disk, not a point, of light.  William Walton from Vermont and Gianni Ferrari from Italy each offer there thoughts and solutions to getting a sharper shadow for reading time more precisely.

Then John Carmichael from Arizona ponders the McMath-Oierce Solar Telescope as a giant sundial gnomon, and then mathematically analyzes what happens if you choose a "fat" gnomon of various shapes such as a cylinder, hexagon, pentagon, square, or triangle.  In the end, John presents the mathematics so that you can accurately draw hour lines on a horizontal dial face given one of these gnomon shapes.

Next, Claude Hartman from California discusses the fundamentals of the Celestial Sphere, and what we mean by the "pole" and "equator".  Then Claude explains those terms used by astronomers and sundialists to define the position of the sun, definining "solar declination" as equivalent to measuring where we are on the earth by latitude and "solar right ascension" as the equivalent of longitude.

Mohammad Begheri from Iran describes the first analemmatic sundial in Iran, starting with "Iran has a long and rich tradition in many branches of astronomy, including gnomonics.  Untial a few decades agon, sundials were used in mosques and madrassas (traditional religious schools) to show the times of the day, especially to determine the times of the five daily ritual prayers."  Read more in The Compendium to find out about the first analemmatic sundial.